Within the companion app, players are able to unlock a new slot machine every ten levels. Players can earn plenty of experience points by placing maximum bets on their allotted golden spins. Each player has ten golden spins they can use up, which recharge upon running out. Golden spins recharge at a rate of one every fifteen minutes and thirty seconds. Using these golden spins to place maximum bets YoCoins and YoCash is probably the quickest and most effective way to level up within the app, which features its own level system separate from the main game. Spins played using golden spins always yield higher amounts of experience points.  There are multiple slot machines available within the game for players to choose from. They typically all function similarly, the biggest difference being the theme. As aforementioned, players unlock a new one every ten levels. The slot machines currently available are listed below;

One feature shared by a few of these slot machines is that they feature a rechargeable bar that can be filled while playing. By collecting bonuses from the slots, the bar fills up and unlocks special rewards open filling up completely.

Pay-tables are also available for viewing at the slot machines by tapping on the wrench icon on the screen and clicking on "Paytable" at the bottom. It is also possible to win free items by playing slot machines, which are automatically transferred to the main game.

The table demonstrated below lists every level a player can reach within the YoWorld Mobile Companion App (YMCA). Within the companion app, there is a level system that is completely separate to YoWorld's traditional level system. Currently, the level system within the Companion app spans from level 1 to level 70 and includes rewards like items, YoCoins, and YoCash. This table is incomplete but is in the process of reaching completion. For a more comfortable view, levels have been sorted under two tabs. Levels 1 - 50 can be found under the first tab, while rewards for levels 50 and beyond can be found under the second tab.

It is possible to transfer earned and won currency from the mobile companion app to the actual game. This makes the companion app an excellent secondary source of income for players who desire more than they make in the parent game. To do this, simply select the little wallet icon on the bottom right-hand corner of the screen where you find your YoCoin and YoCash balance, then type in the amount of YoCoins and YoCash you wish to transfer over to YoWorld. There is no fee for doing this, so you get to keep all your money and do as you wish with it in YoWorld.

Every day there are 5 daily quests that can be done in order to collect more YoCoins. The rewards differ from quest to quest and are usually between 4,000 and 10,000 YoCoins. The daily quests are usually as follows: 2 slot machine quests, 1 treasure collection quest, 1 'collect bonus' quest where you need to collect your 4-hourly bonus 4 times and 1 'gift to friends' quest where you need to send 10 gifts to friends.

Treasure Collection is a version of the popular Bejeweled[1] game within the app where completing different levels at various tiers of difficulties can earn the player YoCoins.

Through the app, you can also buy YoCash and YoCoins by clicking on 'Buy' on the bottom left of your screen. The rates are the same, though sometimes there are promotions on YoWorld on Facebook you won't have in the app and vice versa. 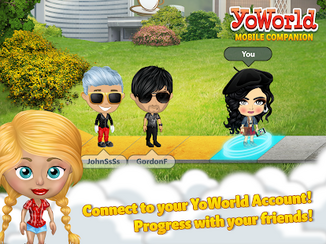 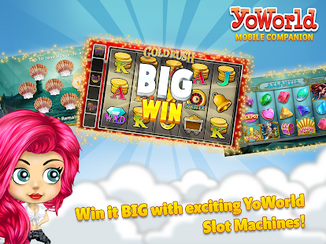 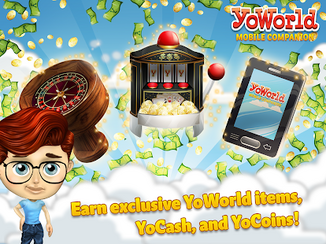 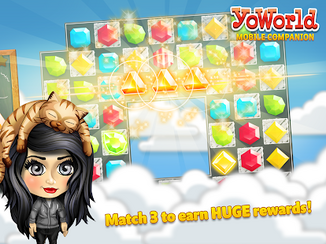 You can find the official YoWorld Mobile Companion App on the following links: