The YoWorld Forums (https://forums.yoworld.com) are the official forums run by Big Viking Games for YoWorld. They can be described as the beating heart of the YoWorld Community. The forums have had a huge history to them, as well as serving a helpful purpose today. To sign up for the forums all you need is a YoWorld account and your forum profile will be using your YoWorld profile.

The new Forums that were created by Big Viking Games were released on June 11, 2014. Your YoWorld account is highly linked your forums account. Your forum avatar is the same avatar you play YoWorld with, and your forum name changes every time you change your name in the game as well, your forum name is the same name you have within the game. Your name also includes your player ID next to it as well. If you get banned in YoWorld for whatever reason, your forums account will also be banned.

Below you can see a video created by a YoWorld player.

This tutorial can be found on YouTube and was posted on April 9, 2015 by Ness. The video talks about how to use the Forums are used. Credit goes to player Ness for creating the video. 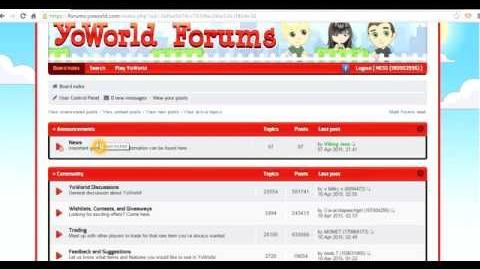 The forums have technically existed since 2008, the year YoVille started. They were found on the YoVille Facebook page. However, when yoville.com was created, the forums migrated to actually have its own page. This was a welcome move as it meant the forums were linked with players' profiles. The forums thrived on their new website and YoVille's first ever employed moderators, Purple and Green, started work in late March - early April 2009.

On the 28th August 2010, the forums migrated. They left the yoville.com format and got a completely new website, run by vBulletin. Zynga's choice to do this was because of how bugged the original forums were and that these new forums had a lot more features and virtual memory.

On the 8th August 2011, the YoVille forums were defaced by a group of computer vandals who called themselves 'TBYH', which stood for 'The Best Yoville Hackers'. They were able to access the Admin panel of the forum, banning several users and staff members, and editing the forums to leave a message warning Zynga and YoVille snitches. Quickly after this happened the forums were taken down and severe security enhancements were made to them. The reason this was able to happen was most likely due to poor security management.

During early May 2012, lots of moderators on the main Zynga forums were brought in to help moderate.

In December 2012, in yet another attempt from Mark Pincus to reduce costs, all Zynga moderator jobs were outsourced to the Philippines, where the mininum wage is a lot cheaper and therefore he doesn't have to pay as much for his moderators. Therefore, every moderator the community had come to love had their jobs taken away.

On June 11, 2014, new forums were created by Big Viking Games for YoWorld.

On July 2, 2014, Supporter Badges were introduced to the forums.

In April, 2016 Levels were visible on the player's avatar.

Forum titles appear on the forums below your avatar and are determined by the number of posts you've reached.