YoWorld is a virtual world game available currently on Facebook and Facebook Gameroom. The game was initially released as "YoVille" on May 8, 2008. It was later re-released as YoWorld on May 13, 2014, by Big Viking Games, after buying the game back from Zynga. According to Greg Thomson, one of the original founders of Big Viking Games, or as it was known at the time, Tall Tree Games, the games initial release was accidental, and the original project was going to be called "My Life". The domain name "YoVille", however, was for sale and was purchased by Tall Tree Games for around $750.[1]

YoWorld is a free-to-play game based on a microtransaction model. This means the game can be played for free comfortably, however, money is charged for additional optional features like YoWorld VIP, which is a monthly subscription-based service. Money can also be spent on the virtual currencies YoCoins (Attention Virtual Currency - Is awarded to players based on how they interact with the game, 'attention') and YoCash (Secondary Virtual Currency - Can also be awarded through gameplay, although less common, and often has to be bought).[2] This virtual currency can also be earned in various ways within the game for free.

YoWorld serves as the main setting and location of the game, it's a place inhabited by a diverse species of beings known as YoWorlders. Other creatures inhabit this YoWorld as well, mundane and otherwise. The precise location of YoWorld is currently unknown. It has it's own flag, economy, and culture.

Initially, YoWorld began under the title of a decorating game. The goal for players in the game during 2008, was mainly to decorate homes and share ideas with one another by socializing.[3] The original themes released within the game only consisted of decorations for virtual rooms. Eventually, with the addition of more clothing items within the game, came the rise of the fashion culture. In combination with both decor, and fashion, and the later addition of the then-new YoCash currency, the path was paved for the game to develop its own organic virtual economy. Eventually, the game's events feature became something similar to a virtual marketplace, where YoWorlders could then host more than just parties, but sales as well as trading centers. The diversity and variety of items within YoWorld continued to expand and grow, especially consistently after 2011. This gave a rise in popularity to other forms of playing like role-playing, and players who played to more exclusively, buy and sell virtual goods. This marked the era of YoWorld's very own virtual renaissance. The presence of all of these virtual cultures helped pave new ways for YoWorlders to socialize.

What was once a successfully blooming fair economy, soon began to suffer. Certain players like price jackers and computer vandals sought to exploit the YoWorld and its economy. With the rise in exploits and vulnerabilities of the game, came the production of counterfeit YoCoins and YoCash, ultimately causing a virtual economic inflation.[4][5] An inflation, which made it hard for players with less wealth to participate in the game's economy, and ultimately lead to two major classes forming in YoWorld, the super-rich, and the super-poor. This economic situation was considered to be heavily unfavorable, this was especially a problem in 2012. To combat this, Zynga began going on banning sprees, eliminating and temporarily resolving many loopholes and issues.[6][7] To help reduce inflation, Zynga made the Blast from the Past release, releasing classical items into the game to cut their worth, with the idea that it would cause many players to go on shopping sprees to eliminate the excess YoCoins and YoCash that plagued the game's economy. Other sorts of players were also able to use various methods to scam other players.

After the refounding of the game, YoWorld experienced something similar to a second renaissance. More options for decorators became common, such as DIY wall panels and floor tiles, which opened up new windows for decorating possibilities.[8][9] New ways to dress up such as clothing layering and saving outfits allowed players to dress in ways previously impossible.[10] The events feature was restored, allowing players to socialize once more and make events like parties, and sales.

After YoWorld came under Big Viking Game's governance, several methods were deployed to restabilize the economy, partially restoring it back to its original state, making it fairer than under its previous developers. After the restoration of the events feature, trading also improved and helped currency circulate within the economy. With an updated trading system, scamming became virtually impossible. Trading YoCash even became possible through this new trading system.[11]

YoWorld is a vast, diverse world. However, the game takes place in a coastal city, in a mountainous region within YoWorld. This location is in a temperate zone since it experiences the four seasons. YoWorld itself is described by the games developers as being an Earth-like planet in an alternate universe or dimension.[12] 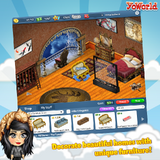 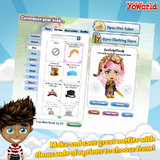 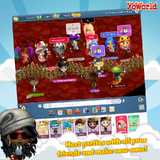 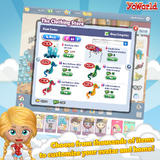