The Steampunk 2015 theme was released on July 20, 2015. This theme was inspired by the subgenre Steampunk, which incorporates technology and aesthetic designs inspired by 19th-century industrial steam-powered machinery.

The theme consisted of clothing, furniture, hairs, 1 pet and 1 house. During this theme an item named 'Animated Clockwork Hat SK2015' was released for 1 YoCoin.

This theme is still available in stores, except for some hairs and a few limited items.

The pet released within this theme was called 'Steampunk Butler SK2015' and cost 17 YoCash. 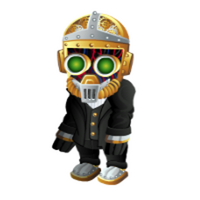 The house released within this theme was called Steampunk Airship SK2015 and cost 29 YoCash.

Retrieved from "https://yoworld.fandom.com/wiki/Steampunk_2015?oldid=72389"
Community content is available under CC-BY-SA unless otherwise noted.