The Salon is a location where players can either rent or purchase hairstyles, skins and facial items using YoCoins or YoCash.

The Salon opened on October 1, 2009 and replaced the Gym on the map. Players reacted positively towards the Salon and liked the idea of having more hair options. Below are two promotional images released with the initial announcement of the Salon's opening. 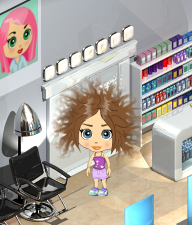 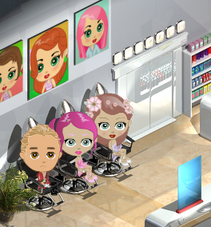 At the beginning, hairs could only be rented as permanent hairstyles didn't exist yet. The first rent-able hairs consisted of re-colored versions of already existing starter hairs, like green, purple and pink. All rent-able hairs cost YoCash to rent.

As the idea of renting new hairstyles became more popular amongst players, developers started to design new hairstyles to match theme releases. The first theme that came with matching hairstyles was the 50s theme. These hairs could be rented like the other hairs. Some other themed hairs were released as well, like Valentine's 2010 hairs, St. Patrick's Day 2010 hairs and Whimsical hairs. All these hairs were only rent-able as well, though turned out to be popular among players.

Since June 2010, permanent hairs started to get developed for themes consistently. Most hairs were typically priced at 18 YoCash each, with some at a higher price. These new hairstyles were received positively by players, though some players had been asking for hairs priced at YoCoins instead of YoCash. This didn't happen until 2014 when Big Viking Games bought back the game, which was welcomed by the players.

Now hairs are a big part of a theme as almost every theme comes with hairstyles and since the introduction of YoWorld VIP, exclusive hairs have started to be designed for VIP subscribers only.

Below is a list of all themes still available in Salon, along with their category name in the Salon and amount of items. The items can be hairs, facial features or skins, and are sorted by release and year. You can sort the tables and click on the theme to learn more about it. Most Salon items before 2014 appear to have been discontinued. 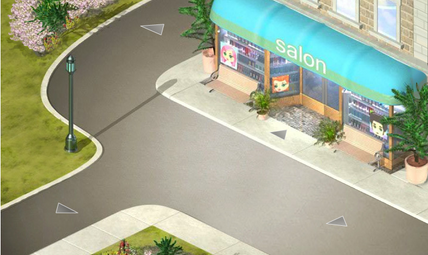 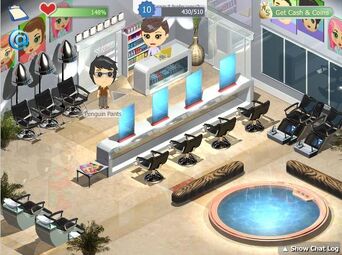 Retrieved from "https://yoworld.fandom.com/wiki/Salon?oldid=75340"
Community content is available under CC-BY-SA unless otherwise noted.